In January 2020 my wife and I flew to Vilamendhoo island resort for two weeks of vacation.

I took the opportunity to take my PADI AOWD (Advanced Open Water Diver) course with Euro-Divers on the island.

Once we settled into our comfy beach villa, I went to meet the team of the dive center and get the paperwork done. I happened to run into Kasia, who would become my instructor.

After taking a day to get enough sleep and acclimatize to the warm, sunny weather, it was time to get into the water. 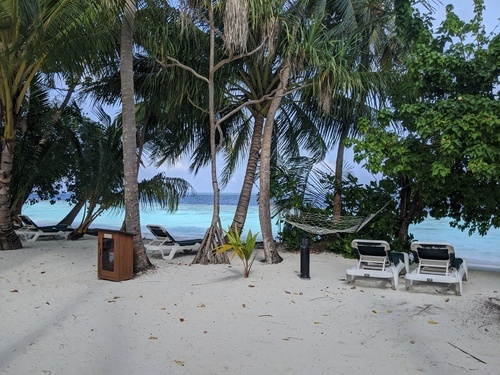 For the first dive on this trip, we went to Coral Garden. The reef itself was nice but the current brought sharks to the dive spot - for the first time, I saw a whole group of sharks swimming past our group. It would not be the last time on this trip. I was not used to diving in considerable currents, so I did not get to take pictures during this dive.

Luckily I had already done all theory at home before we left for this island paradise, so it was pure relaxation between the dives. We were a small group of three people: Mike, who also decided to get his AOWD, our instructor Kasia and me. We planned the deep dive and underwater photography for the first day, peak performance buoyancy, navigation and finally a night dive for the next day. And off we went!

Read more below or go straight to the Maldives 2020 gallery.

Our first dive was at Sunset Faru for our deep dive. At 30m, Kasia pulled out some fruit and asked us to write down what we thought it was - I knew where it was going, but played along. It was a tomato, but due to the light absorption it looked like a weird Kiwi, entirely brown in color and slightly oval due to pressure.

Then she presented a raw egg, carefully removed the shell and shook off the slimy eggwhite. Now we had a weird, wobbly ball of yolk that, thanks to the pressure at 30m, stayed in shape as we carefully “threw” it to each other. As expected we went through our air fast at this depth, so we ascended to 16m and enjoyed gliding along the reef with the mild current.

During the surface interval on the boat we discussed white balance and a few good practices for photography and soon enough we were back in the water, this time at Miyaru Thila.

We experimented with our cameras and enjoyed a calm dive. 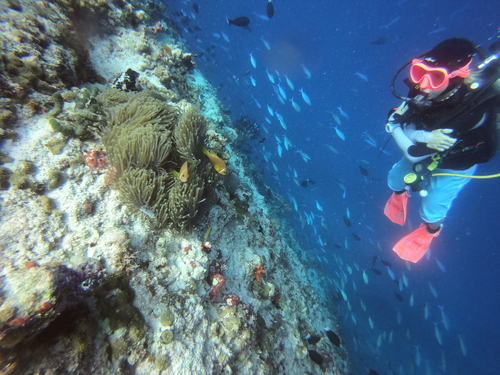 After a day of rest it was time to jump back in the lavish, blue waters of the Maldives. Today we would not have to go far - we did our dives at the house reef.

We did our exercises in navigation and learned better breathing techniques, hovering, hovering upside down (that was so weird but also so fun!) and I was able to ditch 3kg of weights after the exercises. After a nice afternoon break we set out for our night dive. 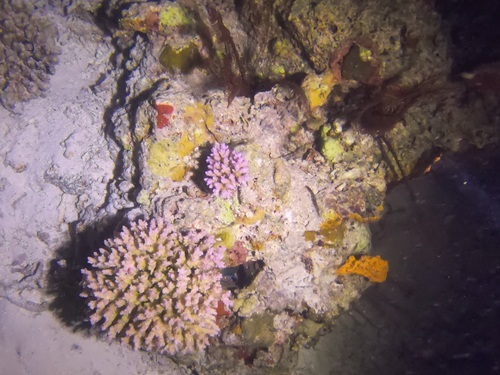 Mike and I decided to sign up for a couple of fun dives together - high on our list: Kuda Raa Thila and broken rock. The lovely folks from Euro-Divers managed to put Kuda Raa on the list right the day after our last AOWD course dives, so we jumped on the boat and rode out to Kuda Raa Thila.

I was quite a bit nervous as the dive site was classified “advanced” and I didn’t quite feel advanced yet. But I knew: With Kasia and Mike on my side, I would be fine. 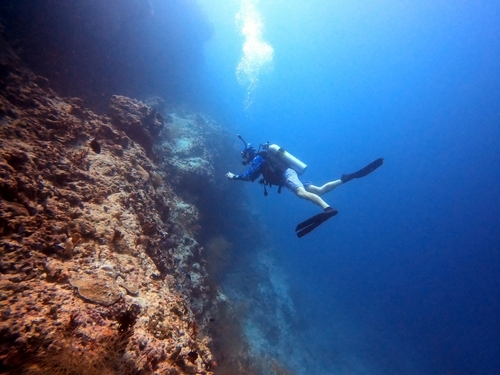 And fine I was (except for when the current pushed me under an overhang for a moment). The upside of the reef formations with its overhangs was that they made for dramatic photo sujets: 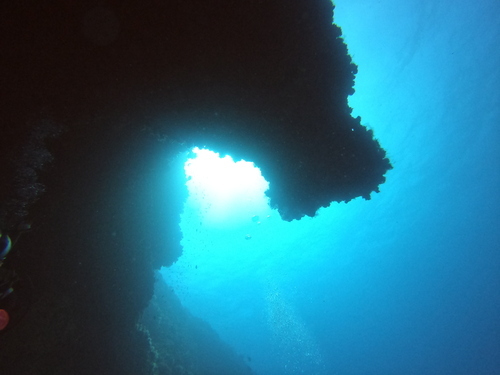 The dive site was beautiful. Besides bat fish and moorish idols, a large swarm of yellow snappers was hanging out at the reef, indifferent to our group of divers. 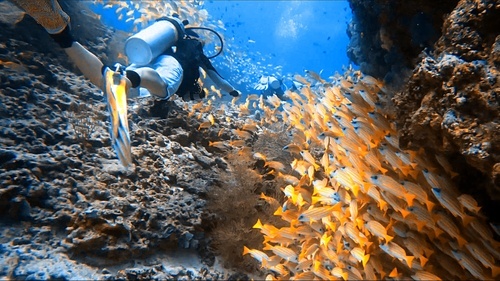 We also got lucky as an Octopus crossed our way and a leaf scorpionfish was lingering at the reef.

After a surface interval on the boat, we went to Vilamendhoo Thila - not far from our resort island - to do a second dive that day. We expected a bit of current and hoped for sharks or rays. Rays did not show up… but sharks did! A few white tip sharks drifted past as we held on to rocks and let the current blow past us. 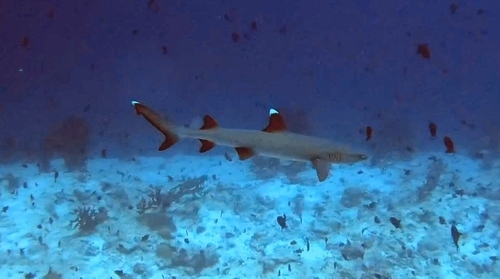 Sharks are stunningly beautiful creatures and us humans are a bigger danger to them than vice versa. After watching these beautis gracefully swim past the reef, we let the current carry us along the reef, too. Back to the boat for today. 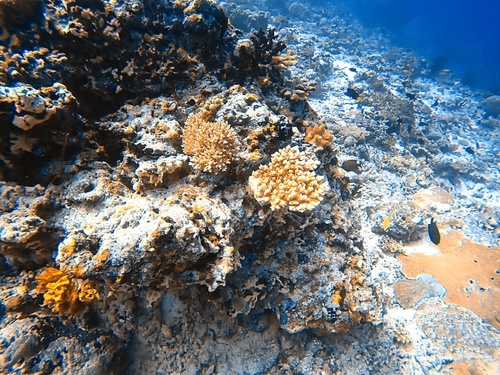 After Mike had already moved to another island, I got the chance to explore broken rock. This dive site is quite unique and impressive. The thila here was split into two parts with a narrow canyon between the two parts. The canyon has a swim through, lots of gorgonias and fish hiding in cracks and overhangs. Depending on the current it is possible to drift through the canyon, but when we arrived we barely had any current inside the canyon. 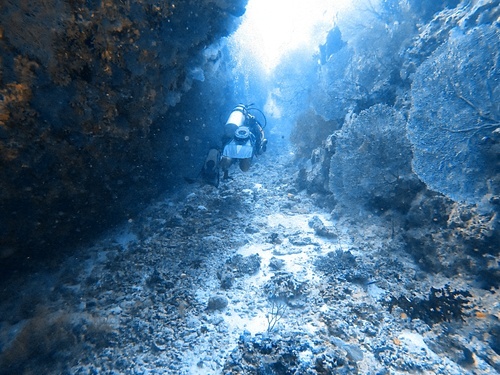 There were plenty of large gorgonias on the walls and after having to do a negative entry and strong currents blowing us over the reef, the tranquility in the canyon was magical. 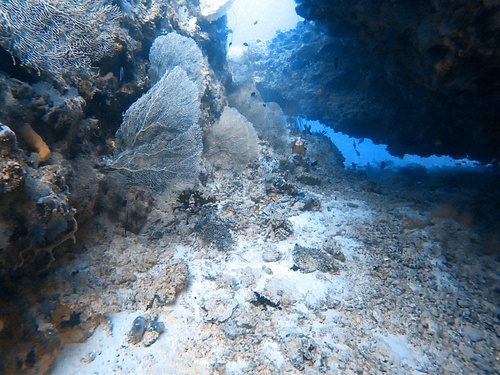 Gorgonias were also quite prominent at Orimas Faru, our second dive site that day.

Definitely the absolute highlight of this trip was diving at Manta Point. We drifted along the reef there and then held onto rocks to wait for manta rays near the cleaning station… and we got lucky.

At the first dive, a few manta rays (one was called Rhonda, if I remember correctly) came up close and kept circling us for a while. Our group was absolutely awestruck - the grace and the curiosity of these beautiful beings could be felt. It was captivating how playful and friendly they are.

We came back to the boat with our minds blown. We were told we had a 50/50 chance of seeing a Manta. A manta, singular. We saw three. We could not stop talking about our encounter with these smart, wonderful creatures while having lunch on the boat. I needed quite a while to process what just had happened, but before I could, we went for a second dive at the same spot… and got lucky again!

On our way back from these two amazing dives, we stopped for a last dive at Miyaru Thila again - and it was as great as the first time we were here!

A shrimp tried to hide in a little hole and a black-spotted puffer fish went past us. 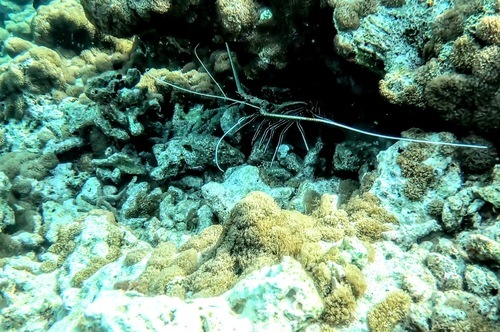 The day started with a dive on the south shore of Vilamendhoo. My buddy Dirk and I went for a nice dive along the house reef, spotting a Baracuda, sharks and garden eels. Unfortunately they were either too far away, too fast or too shy for me and my camera. 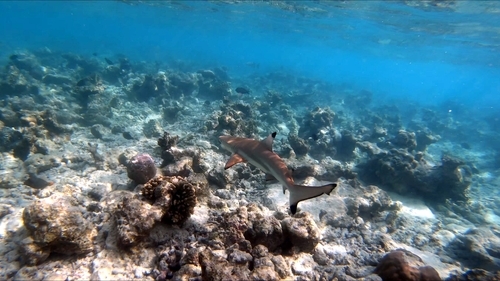 But don’t worry, other reef dwellers were happy to have a picture taken. 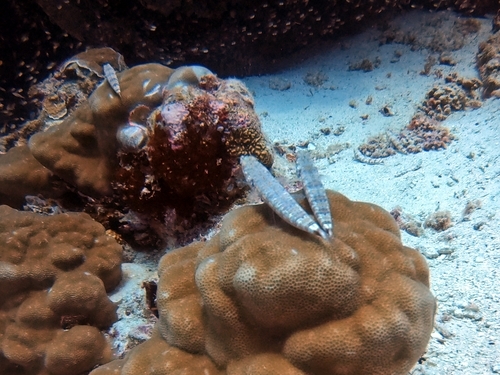 A moray checked us out from the safety of her little crevasse.

As we left for the shore, a scorpion fish hid in the sand in shallow water. 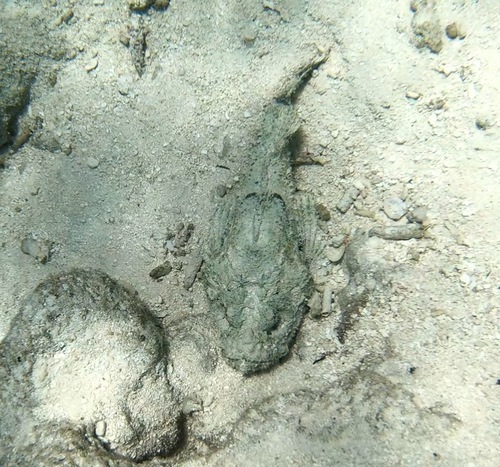 In the afternoon it was time for my first wreck dive. Kasia and I would buddy up once more for a dive at Euro-Divers Vilamendhoo. 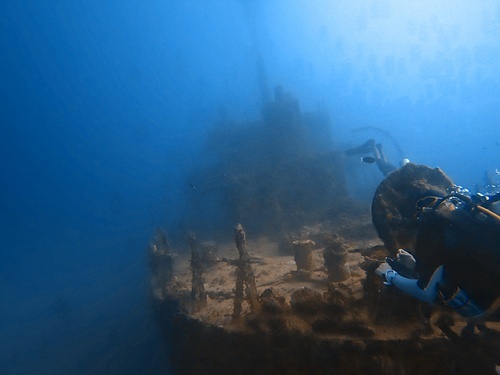 The MV Vagaaru, a japanese cargo ship built in 1968 was sunk intentionally to create an artificial reef and an attraction for divers. The 52m steel ship, nicknamed Kudhimaa wreck, sits on its keel in the sand next to Machafushi island. With the bottom at 30m at the highest point of the wreck at approximately 16m, this wreck is relatively well-suited for recreational diving and the many fish, sponges, clams and corals on it give it a lively, yet mysterious aura. 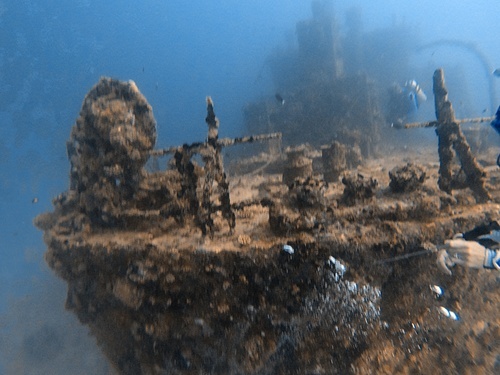 We swam around the entire wreck and into the wide-open cargo hold. 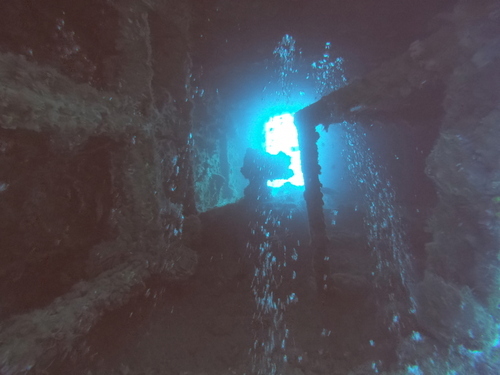 An interesting feature is the presence of a few stonefish who became residents and seem to stay roughly stationary on the wreck. 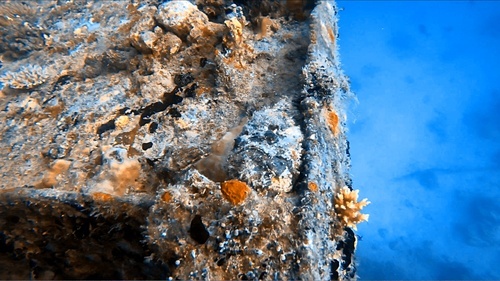 After 39 minutes, we surfaced and went back on the boat.

After so many amazing dives, I could not resist the temptation to keep joining the many trips organized by the dive base. So I signed up for Bapoli Thila - a choice, I would not regret! 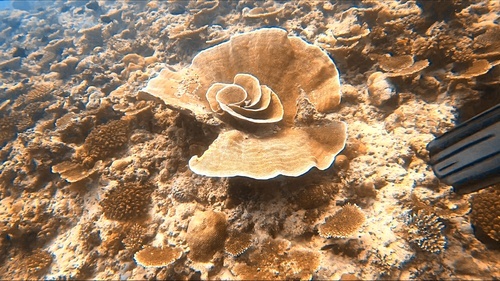 Besides pretty corals, a lion fish was resting in the reef and a few starfish were slowly making their way to their next meal. Parrot fish hid from the current on the other side of the reef, too. 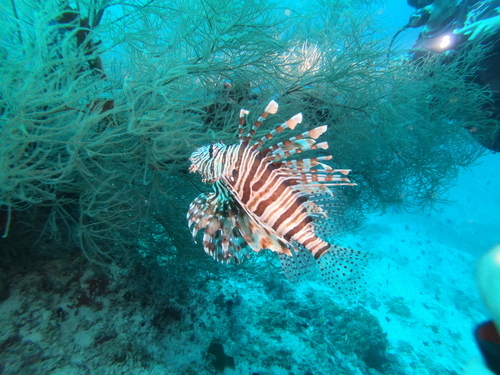 Knowing I had to take a 24 hour break from diving before taking our flight back home, I ran the numbers and wondered if I could do one last dive in the morning the next day. When I said that while de-briefing with the folks at the dive base, the idea came up to do a house reef dive on the northern side in the morning, so I would have enough time before flying. The next morning, Pierre and I went into the splashing waves at the northern house reef. 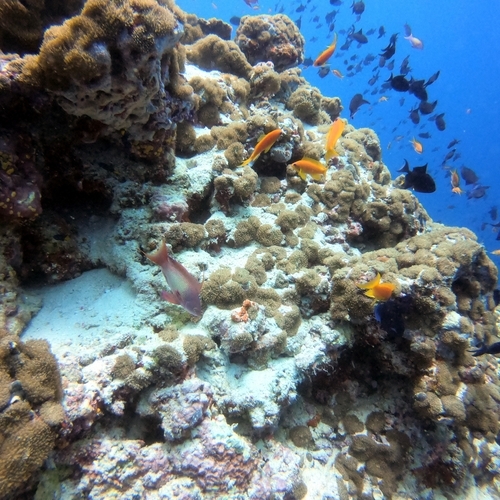 This dive was lovely - a few eagle rays gracefully flew by and a turtle checked out my camera. 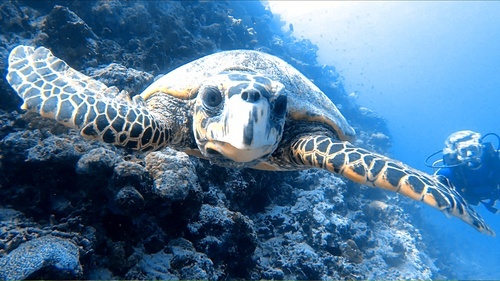 It was a fantastic finish to this trip and diving with Euro-Divers Vilamendhoo.

There were many more impressions I captured and you can find the full gallery of the maldives trip here, but more importantly than the colorful, lively reefs and the amazing creates I came across were the people I met along the way.

The entire team of Euro Divers Vilamendhoo were fantastic - I would not hesitate to come back! Especially my instructor Kasia and the resident marine biologist Hannah became friends and we continue to share our musings, silly bits and the bond of the shared love for the underwater world and its inhabitants.