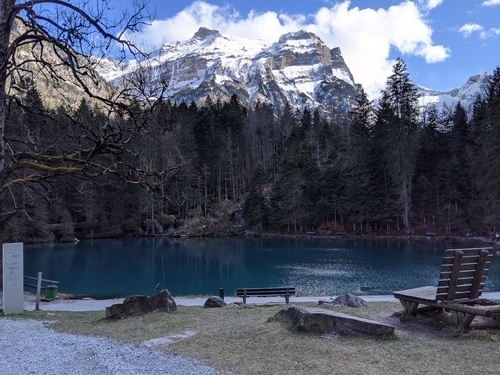 Go to the full gallery of the Blausee dive.

It’s a sunny Sunday in March when a small group of seven divers meets at Hotel Blausee in Switzerland. Our plan: To dive in the clear, blue water of lake Blausee with lots of curious trouts, trees and a statue under the vibrant, colorful light of the late winter sun. With nearly two hours of driving behind us we all look forward to jump into the luring lake with its blue and crystal clear water.

While the sun has warmed up the air to a comfy 13°C, the water is colder than usual with 6°C instead of 8°C. Good that we all brought our drysuits and warm undergarments. That did not worry us - with a maximum depth of 12 meters, we would neither go deep and with the small size of the lake probably not long either.

A nice surprise is the heated hut the hotel provides for divers to change and stow away gear in between dives.

Here is a little teaser:

First dive: Rays of sunlight and the legend of lake Blausee

My buddy Katja and I assemble our gear, check everything works and make the short way down to the entrance. We lower ourselfs onto the small platform and into the water. We signal OK to each other and start our descent.

The sunlight dances on the rocky ground and trouts swim through the changing shades and sparkles coming from above. 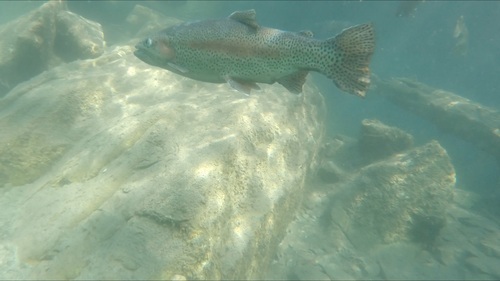 We dive to the left side of the entrance along the eastern shore of the lake. After a short while we reach a statue under water. The statue is an allusion to the legend that is told on various signs around the lake.

Long story short: There once was a maid who loved a nobleman, but the nobleman died one day and left the maid in tears. As their affair was frowned upon she decided to go to the lake to cry, her tears flowing from her blue eyes straight into the lake. According to the legend this is where the lake got its blue water from. 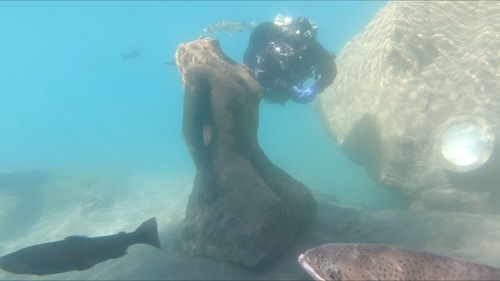 We continued along the lake shore and over trees, along rock formations and various underwater plants back to the entrance. After 25 minutes we decided to take another go at it and enjoyed the dancing shapes and colors from the warm, golden sunlight until we felt it was time to go. 43 minutes later we surfaced, stowed away our gear in the little hut and decided to decompress with a warm drink in our hands.

Second dive: Hanging out with the trouts among the trees

With the sun moving behind the mountains, we could not resist to go for a second round. This time I went with Felix. Felix and I decided that we would like to hang out with the local trouts and so we went to a bay where a few trees under water seemed to attract a group of trouts. 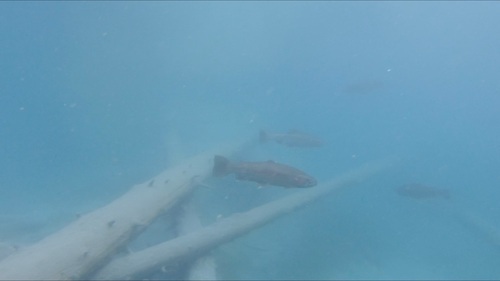 Unsurprisingly with a regular influx of divers in this lake they were not shy. Quite the contrary: They seemed very curious. 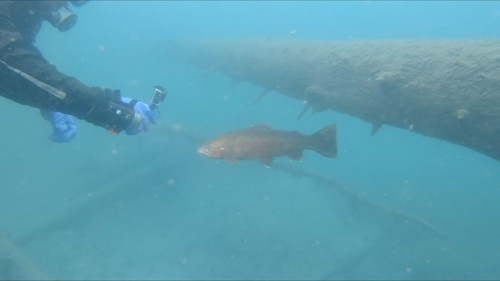 Meanwhile Katja, who decided to walk around the lake instead of going in a second time noticed that the water is so clear that you can see the statue from above.

We came back to the entrance after 24 minutes, happy, thirsty and ready for our four-course dinner menu. 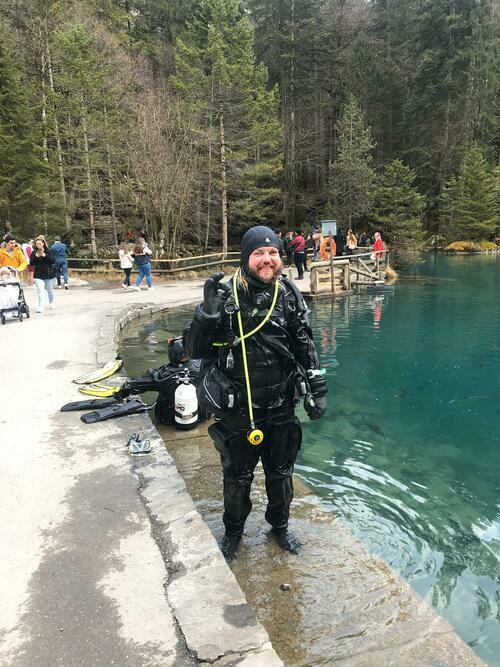 If you want to see a few more pictures, check out the gallery of the Blausee dive.

I really enjoyed diving in Blausee. The infrastructure is great, the lake beautiful and easy to dive. This day was also a little milestone for me - the first of the two dives was my 30th dive! Having been convinced that I might manage to go for a handful of dives each year, this seemed very far out. I keep learning and improving and it is amazing to be able to enjoy the underwater world with old and new friends so frequently!

Especially wonderful: Kasia and Hannah who I’ve met on the Maldives dive trip sent me a super fun picture to congratulate on the milestone while they were diving! 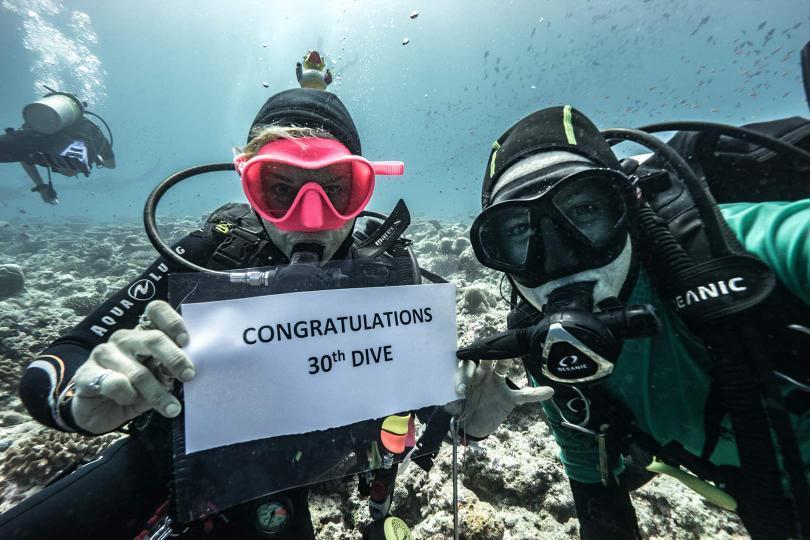 I am truly blessed to be part of this great community and to make such friends along the way :)